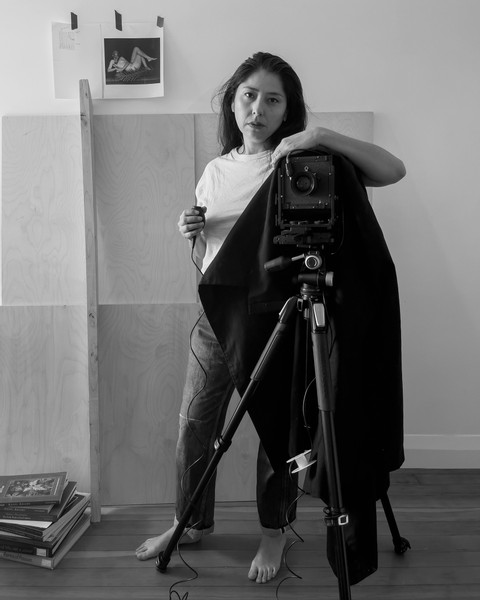 Galerie Thomas Zander is delighted to announce the representation of Tarrah Krajnak!

Tarrah Krajnak (b. 1979 in Lima, Peru) is currently based in Los Angeles. She was awarded the Jury Prize of the Louis Roederer Discovery Award at Les Rencontres d'Arles in June 2021 and most recently the 2021 Hariban Award Grand Prize, Kyoto, Japan.
“Tarrah Krajnak’s work makes clear reference to the history of photography, on the one hand, and to the artist’s identity as a Latin-American woman, on the other. A sequel to her first critical homage to Ansel Adams, her latest series Master Rituals II: Weston‘s Nudes is dedicated to another North American “master”, Edward Weston. Krajnak here re-enacts the famous Nudes (...) Restoring to the picture what Weston left outside the frame–portions of the model’s body and in particular, her face, whose obliteration tends to make us forget the identity of the two women and participation in the creative process–or emphasizing Weston’s framing choices—what he excluded—using simple wooden panels, Krajnak replays a significant chapter in the history of photography while re-focusing on the role of the female model. Further, she challenges the female stereotypes created and propagated by photography: a white ideal, shaped by male tutelary figures. Through this performative and photographic act, Krajnak affirms her Latin-American identity and her body of color. She creates through her presence and the gesture of image reconstruction a dialogue with her predecessor, Weston, as well as with her contemporary viewers.“ (Sonia Voss, Curatorial Statement for the Les Rencontres Arles Discovery Award Exhibition)

Krajnak is an Associate Professor of Art at Pitzer College in Claremont, CA where she is also the Director of The Munroe Center for Social Inquiry. She received grants from the National Museum of Women in the Arts, Arizona Commission on the Arts, Vermont Community Foundation, and the Harpo Foundation.