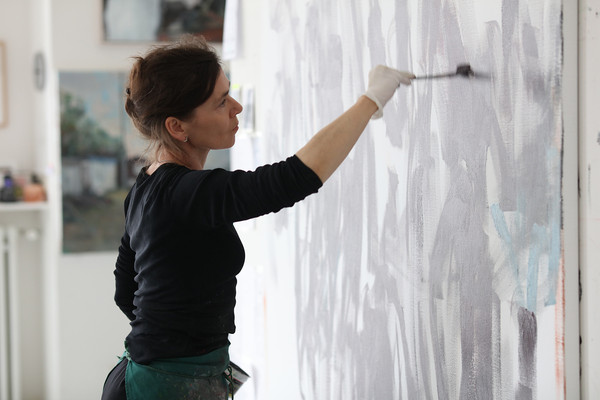 We are delighted to announce that Galerie Thomas Zander now represents Sabine Moritz!
Sabine Moritz’s paintings and drawings centre around themes of memory both personal and collective. The passage of time is palpable across her oeuvre through recurrent motifs drawn from memories of her surroundings as well as documentary images. The artist's recurring motifs are nature and still life, war, suburban settlements and figure, whereby the immediate surroundings serve as the most important source of her works, intertwining inner and outer perception. Since 2015, the artist adds a second strand of work in parallel with her figurative work: abstract painting. In these current paintings, it has given way to a blatant color spectrum in which new expressions of energy, movement and rhythm are revealed.

Sabine Moritz was born in Quedlinburg in 1969 and emigrated from the German Democratic Republic to West Germany in 1985. She studied at the Hochschule für Gestaltung in Offenbach and the Kunstakademie Duesseldorf. The artist lives and works in Cologne. Moritz's work has been exhibited in European institutions including De 11 Lijnen, Oudenburg, Belgium, Kunsthalle Rostock, Kunsthalle Bremerhaven, Von der Heydt Kunsthalle, Wuppertal, Germany.